A Tribute to the Claus's

When I was a little girl there was a family called the Cox's. The husband and wife dressed up as Santa and Mrs. Claus each year and attended the lunch with Santa and other Christmas parties in our town. There is a photo from our local newspaper that has my sister and I sitting on each f their laps.

As I grew up and began having kids of my own, the Claus's changed. Mr. Cox died and eventually so did Mrs. Cox.  The new Santa and Mrs. Claus was Mr. and Mrs. Brewer. They were a jolly couple full of happiness and much love for the children of Caribou. 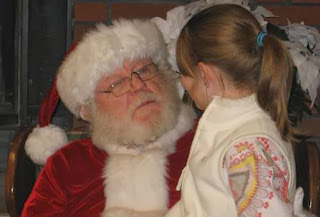 They proved to truly symbolize who Santa and Mrs. Claus were for all of Caribou. They put the magic into Christmas and really did send word to the north pole exactly what each little girl and boy wanted. Not only did they act the part but they looked the part as well. When parents would bring their children out to eat at McDonalds or to the store, sometimes they would be spotted in their regular clothing. The fun part about that is that the parents could say that Mr. and Mrs. Claus were in disguise to make sure that their kids were being good. 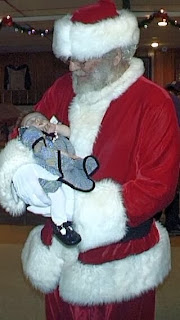 Sadly this wonderful couple died this year. This has left a gaping hole in our community and a sadness that is felt all around the holiday season. I thank his beautiful daughters for sharing their parents with us during this season. It was an honor to be known by all. To Mrs. Davis and Mrs. Kauvach, you two belong in my heart forever. You have shared your parents and my heart is deeply saddened by the passing of your father. The city of Caribou will never be the same. Farewell Mr. and Mrs. Claus. There will never be anyone of equal value to replace you.

May the memory of the Claus's, The Cox's, and the Brewer's live in the hearts of many young and old. The magic that they brought our little community will forever be lasting and memorable. Merry Christmas and know that the Santa's and Mrs. Claus's of times past are watching over you each and every day.