Birthdays and other good news

My grandmother seems to be doing better. She is in the nursing home in rehab right now. However there's not telling how much longer she will live. She says she is going to live another 10 years. She is strong and stubborn woman so I don't doubt that she will live for another ten years. As of right now she is only on the BYPAP machine at night and her regular oxygen during the day. She is still on an iv and is hoping to be off it today.

I just attended my sister's sweet sixteen birthday party. I have never before seen a party like this except on MTV and in the movies. Have you ever seen the Sweet Sixteen show on MTV? Well this party was somewhat like it. They had a VIP party earlier in the week. We had a guest list and only the people on the guest list were allowed in. It was a black and white semi-formal affair. The VIP's wore silver and one of the birthday girls wore red and my sister wore a beautiful creamcicle orange dress. She was so beautiful. I was the checker in person as well as a bouncer. I was able to successfully keep three uninvited boys out of the party. It felt really cool to be able to be a tough person.

My baby is turning 7 on Friday. Where has the time gone. She has gone from this: 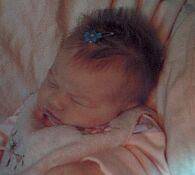 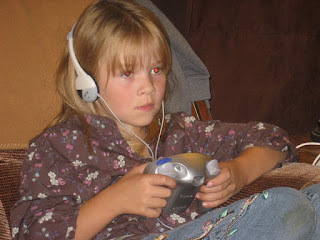 It's hard to believe that my baby is this big now. It is so hard to see her as a little girl rather than a baby. However she is the most independent of the three. She is the only one who has never been to public school except for two weeks. (that was preschool) So on Friday, my baby girl will be 7.

Right now we aren't going to be doing any extra activities with our homeschool group until next month. Our kids are having a hard time staying on task with things and listening and following directions. It seems like event though they have been taught certain things, they aren't using them and forget how to use them. For instance using a dictionary. It took Hunter over 20 minutes to find the word "barter" in the dictionary yesterday. First he couldn't figure out how to spell it. Then he couldn't remember how to use the dictionary. He sat next next to his dad for 45 minutes without finding the word. For the first 25 minutes he sat next to him telling him he didn't find it in the dictionary and didn't know where the dictionary was. Today he has yet to start his school work. I know I need to button down the hatches and make it known that he isn't to be out of his seat until school work is done. But how can I do that when we are "home schooling"? Homeschool is suppose to be the way you want it. Well, in my home, it's not the way I want it. I want my kids to be comfortable doing their school work and getting it done in an efficient manner. I want to be able to help them when they need it. I want to be able to do their math and science with them without a complete blowup with either me or them. I want perfection which I know I won't get. Anyway. Hopefully this week I will be able to make things a little more structured and maybe I'll even make up another time schedule. I'll think about that a little more today.

Well the laundry is buzzing at me so it's time to go switch loads.

Oh, I hope you find something that, even if it isn't perfect, works well for your family. Hugs, and glad to see you bloggin'!

My baby turned 7 in July. It is amazing how quickly those years slip by. When my oldest turned 20 in Aug. I cried. I love your blog layout-very festive and pretty.
Have a great week ahead!
Don't feel bad about not gettin as much schooling in (if I read that post correctly-you hvae a lot of company-including me!)
Blessings-
hey are you in ME? We are in need of a postcard from there-interested in a trade?
Thanks